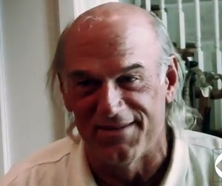 Jesse Ventura discusses the 2016 presidential election,  government lies, Edward Snowden, controlled big media and immigration politics. Jesse is back in the US after some time away in Mexico and he has a lot to say about the country with Buzzsaw host Tyrel Ventura, LipTV.

About Jesse Ventura
Former Governor of the state of Minnesota, Jesse Ventura needs no introduction. His larger than life presence in wrestling and entertainment is only outshadowed by his political independence and activism both in and out of government. After a recent spell in Mexico, Mr. Ventura is back in the United States. His most recent book is ‘Democrips and Rebloodlicans.’

I Alex Jones långa intervju, på Venturas hemsida, såg jag bl a detta: “….was biological warfare, infecting pigs and mosquitoes with agents to kill people, and lo-and-behold, we end up with Lyme disease. The first recorded case was in Connecticut, right across the water from Plum Island…”