At the dawn of the 21st century, space agencies in Europe and America are making plans to land the first humans on Mars. But manned missions to the red planet have been proposed before.

‘The Mars Underground’ is a landmark documentary that follows Dr. Zubrin and his team as they try to bring this incredible dream to life.

Through spellbinding animation, the film takes us on a daring first journey to the Red Planet and envisions a future Mars teeming with life and terraformed into a blue world. A must-see experience for anyone concerned for our global future and the triumph of the human spirit. 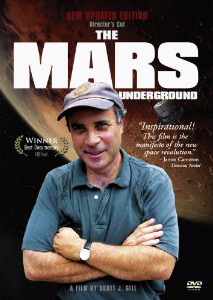 For some, Mars holds the answers to mankind’s future in space. Others say Mars is too far, too dangerous and too expensive for humans to explore. And in a world torn by troubles, some say there’s no need or will for mankind to reach into space anymore.

Leading aerospace engineer and Mars Society President Dr. Robert Zubrin has a dream. He wants to get humans to the planet Mars in the next ten years. Now Dr. Zubrin shows how we can use present day technology and natural resources on Mars to make human settlement possible. But can he win over the skeptics at NASA and the wider world?

“This film captures the spirit of Mars pioneers who refuse to let their dreams be put on hold by a slumbering space program. Their passionate urge to walk the soil of an alien world is infectious and inspirational. This film is the manifesto of the new space revolution,” said James Cameron, director of Avatar, Titanic and Aliens.