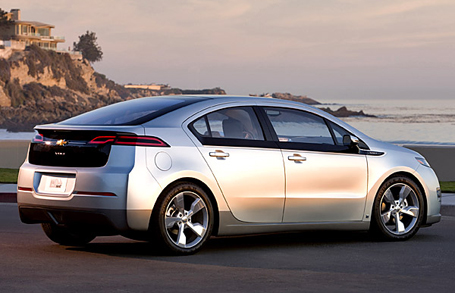 With its Volt, GM zaps popular preconceptions that it’s incapable of making a progressive, outside-the-box vehicle. The exterior is understated and attractive, and the interior is sleekly high tech without being overkill.

Accessible in both its design and operation, there’s a normalcy to the Volt that belies what’s under the hood. The Volt, which goes into production next month, will be the world’s first mass-produced plug-in electric with a range-extending gas engine. Chevy calls it an extended-range electric, although the automaker, which only recently cleared the patent on the Volt drivetrain, explained last week it’s actually a hybrid that uses a gas engine coupled with two electric motors.

The Volt is one of the most highly anticipated cars of the year. Capable of traveling 25 to 50 miles on electric power with its 16-kilowatt lithium-ion battery pack and 111-kilowatt electric drive unit, the Volt can drive another 310 miles with a 1.4-liter internal combustion engine that juices its electric generator and drive motors.

Designed as an all-electric commuter that also can go the distance, the Volt achieves its best fuel economy, lowest emissions and lowest cost of operation when running in pure electric mode. According to GM, running an electric car costs 2 cents per mile to operate versus 10 cents a mile for gas.

iCar – More evidence that Apple is working on an electric car