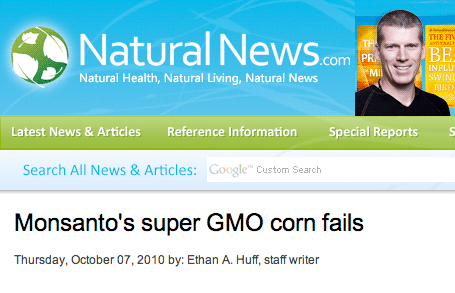 The tides may be turning for agri-giant Monsanto, the multi-national company most recognized for the propagation of genetically-modified organisms (GMOs) around the world. According to a recent New York Times article, Monsanto’s new “SmartStax” variety of GMO corn has failed miserably, and the company’s stock prices have plummeted by nearly 50 percent since the beginning of 2010.

Until recently, Monsanto’s stock value had been steadily rising since 2008, but as its new GMO varieties have failed to live up to expectations, share prices and profits have been plummeting. SmartStax corn, which is far more expensive than previous GMO varieties, has failed to achieved desired yields, as has the company’s newer variety of GMO soybeans. Both failures have led not only to major price reductions for seeds, but also far less overall sales by farmers.

Monsanto’s strategy has been to continually insert increasing amounts of new genes into seeds to make them perform better, and subsequently increase prices for farmers. But that predatory strategy has failed, as farmers are less willing these days to buy such seeds, especially at premium prices. And many farmers simply no longer trust Monsanto.