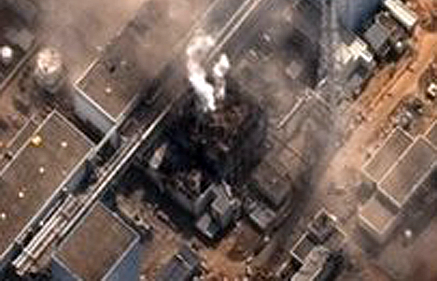 Frigyes Reisch is one of the leading experts on nuclear safety in the world. He worked for 27 years at the Swedish Nuclear Power Inspectorate, SKI. He has worked for the IAEA and with nuclear scientists on know how to judge nuclear incidents. Now he says – in an exclusive interview for Aftonbladet – the accident in Fukushima is as severe as Chernobyl. The release of radio activity is most likely in lethal doses.

The Japanese authorities classifies the disaster as a four on the seven Ines-scale,  which means “an accident without significant risk to the environment”. Reisch dismisses this as a cover-up:

– They have  economic interests. This is a seven. During my years at SKI, I would not have talked, but now I’m retired and can speak freely.

– This is absolutely comparable with Chernobyl. It’s about the impact on a large area with many people and local release of radioactive material that is likely to be the case of lethal doses,” he says, Aftonbladet reports.

INES scale is set by the International Atomic Energy Agency, IAEA, and based on how a nuclear accident may cause risks to human health and the environment. The scale is logaritmic, meaning every step of the scale is about ten times worse than the previous.

The most serious nuclear accident in the world – the one in Chernobyl in 1986 – was classified to a seven.
Since the earthquake and tsunami last Friday, four nuclear power plants in northeastern Japan reported damage. Most serious damage appear to be in the Fukushima Daiichi complex where a meltdown or “partial meltdown” has been found in Unit 1 and 3.

Frigyes Reisch, 78, is associate professor of nuclear safety at the Royal Institute of Technology (KTH). Over 27 years, until 1997, he worked for the Nuclear Power Inspectorate, SKI. In 1993 he worked a year for the IAEA as an international educator in the INES scale, including in Russia and the Czech Republic. Frigyes Reisch believes that the Japanese authorities blinds the dangers of Fukushima to keep people quiet – but there is also a national scope:

– There is tremendous commercial interest in this. The entire world’s nuclear industry is Japanese.

– Given all the rescue workers who worked closely with the affected units and inhaled radioactive steam, it´s in reality impossible to not die of radiation. It’s not good. I do not know how many people who live north of Fukushima, but I guess it is so densely populated that there are a few million,” said Frigyes Reisch.

So far, winds have been westerly and blowing out the radioactivity of the Pacific Ocean. But according to forecasts, they will during the day today to turn around and start blowing north – with the chance of precipitation. How far the radioactive particles can be spread is due to local conditions. After the Chernobyl accident Gavle, 1000 km from Chernobyl, had most radioactive precipitation in Sweden.

Dave – what has happened now to the spent fuel rods?

hello Slawomir sir,
as ur words that nuclear pwer production is not the safest way of power production. but we know other fossil fuels r consuming day by day, only leaving the nuclear power as future option. so, because of these risk, willl we return in stone age. so there must be death because of lack of power. then why not we take risk to live our life how much we have. we only have to take care of safety as possible as. leave other for nature. because nature can destroy every thing whatever u have planned.

You are right in that the core at Chernobyl went through the roof, but it was 1 core. There is 1 core at Fukishima that is probably breached, while 2 other cores are in the process of partially melting down (its to radioactive to go and see). What you completely forget to mention is the pools of spent fuel. There was a spent fuel pool above the reactor that exploded in a giant mushroom cloud a few days ago. That pool is dry and there is a good chance the spent rods are sitting at the bottom of that pool, probably on fire from the zirconium casings. There are something like hundreds of tons of spent fuel that is massively over heating. As well, you didn’t mention the MOX fuels used..mixed uranium and plutonium – plutonium which is HIGHLY deadly. That reactor (if forget which one) and spent fuel is in sever conditions. Pools 5 and 6, that have spent fuel in them, have reached something like 60C, or about 140F, which is not in a good direction. I think the scientist is accurate when he compares this to a level 7 situation.

Thanks for explanations, Mike.
However:
1) The factor of power decreasing by 100 doesn’t seem satisfying to me, regarding the chain reaction scheme.
I just can’t believe any Russian politician, not to mention Japanese atomic experts could be so near-sighted!
2) On the other hand – how weak are the cooling procedures they attempt to implement at Fukushima, if they’re unable to dissipate just 1% of standard energy production?

If your information is correct – who the hell dares to claim it is a safest way of energy production?!!

Yes U are right but it’s not the end. Now we can’t compare Chernobyl to Fukishima but the situation is still changing…

Frigyes Reisch draws conclusions which are far fetched.
At presents what is happening at the Fukushima NPP is NOT comparable to what happened in the Chernobyl accident.

-The Chernobyl accident happened when the reactor was operating. A prompt criticality increased the power output by several orders of magnitude in a fraction of a second, causing the coolant (water) to evaporate almost instantly. This caused the reactor to explode with a large fraction of the nuclear fuel blown out in the atmosphere.

-The Fukushima reactors shut down immediately when vibrations from the earthquake was detected. This stopped the nuclear fission process and the power output is decreased by approximately a factor 100. The remaing power output, the decay heat, needs to be cooled off. This has obviously not worked, causing the fuel rods to overheat, which in turn causes water that comes into contact with the fuel rods to decompose into hydrogen and zirconium oxide. The hydrogen and steam produced inside the is released to the outside in order to maintain the pressure within safe limits inside the reactor vessel. It is the hydrogen inside the reactor building that has exploded OUTSIDE of the reactor vessel and reactor containment, causing the reactor building to be destroyed. Because the explosion took place away from the nuclear fuel the release of radioactivity is insignificant compared to Chernobyl.