The shocking and tragic attacks in Norway last month were committed to halt the spread of “multiculturalism” among other perceived threats, according to prime suspect Anders Bering-Breivik’s 1, 500 page manifesto. At the same time, a talented if troubled pop-icon, Amy Winehouse, OD’d and dropped dead at her own hand in the UK.

All have tried to make sense of the terrible and unthinkable, but few have traced these tragedies to what they are: self-inflicted crises of consciousness and alienation from the core-self (soul) and from the human family. I believe that a “soul” context allows us to more soberly examine the terrible harms done in Oslo and London, and the impotency of our institutions to help prevent them.

Beyond Duality: A Case for Alternative Spirituality?

Like a worn-out tape-recording, we’ve heard the same tired knee-jerk judgments in reaction to recent events: one side relentlessly tying “terror” or “war” to religious extremism or all religion for that matter. The opposite side scurries to denounce violence, deny their religion’s fallibility and blame modernity and the loss of good old-fashioned morals for today’s problems. Will we ever go beyond these predictable polemics and to the heart (and soul) of these inexplicable acts?

The experts on CNN and FOX news don’t create much comfort or hope for viewers who may be struggling with their own downward spirals-perhaps future Bering Breiviks or Winehouses desperate to reverse course before they hit rock bottom. There is another way.

To get to it, our so-called broadminded multicultural societies must open themselves to alternative therapy practices with spiritual features. We need more support for what Dr. Bill Plotkin calls “Soulcraft.”

Getting Past the Orthodoxy’s Limits on “Soul”

On one hand, materialism’s rules of conformity and cultural mythology’s codes of indoctrination have brought some positives to many people and places.

On the other hand, our customary “hard” science-driven world-view and those of the world’s great religions are limited: no longer able to give a growing number of people enough tools or mature exploration of the radical “inner world” of soul.

Plotkin describes soul as “the vital mysterious and wild core of individual selves;” to me that translates as a deeper part of us that seeks meaning and a language of expression to make sense of uncertain times and how we fit in to them.

May be men and women who make like the clinically insane (Bering-Breivik would fit this profile) should just be rounded up and thrown in isolation. But before someone turns dangerous; something at their core has to first twist, crack and melt down; something that could feel troubled in a modern atheistic Scandinavian society where the majority looks down upon those who believe in a soul.

When the soul is either dismissed as nonsense by ultra-rationalist atheists or viewed as something that needs to obey by the rules by religious conformists— then we face two major road blocks to a more mindful non-violent way of coexisting.

How many families, communities or schools do you know that provide welcoming and intimate spaces for the healthy exploration and expression of an individual’s inner fears, hidden wounds and, intimate passions on a soul level? —Without them, self-health suffers.

To shut the sacred inner part of the self off creates perfect conditions for fanaticism, depression, or worse-at which point the rational and linear don’t register and orthodox religious laws may only further entrench a person. It’s the human Shadow at its worst.

Clinically, Shadow work, an offshoot of Jungian archetypal psychology, is the closest thing to exploring what might be called the sacred inner world of the soul, but some believe the soul can best be navigated through an alternative spiritual approach-shamanism being one form of soul work that does so.

Shamanism, among other benefits, provides a language of symbols to engage and explore the individual’s essential inner world. Symbols and archetypes are not only the building blocks of myths, stories and art, they can also create coherence, alleviation of pain, and new appreciation for humanity for those experiencing complex hardships, according Dr. Michael Harner, Anthropologist and ex-New York Academy of Sciences faculty member.

They may not be for everybody, but at their core, shamanic arts and other alternative schools of soul work can enable a troubled person to more peacefully take ownership of their ill feelings (either of body or mind) and trace them to the big picture (the soul’s journey).

Reunion with the Inner World

We need more explicit acceptance of soul-affirmation, since there’s not enough acceptance of the soul’s gifts (even from multiculturalists, who call themselves open-minded).

Many definitions of the term “multicultural” don’t make room for alternative spirituality. Indeed, the Wikipedia entry for multiculturalism, while inclusive of cultural diversity, contains neither the words “spiritual” nor “soul.”

Modern society loses big when its people lose touch with their soulcraft, and devalue those who advocate for soul work. That’s likely today because our institutions don’t offer enough support for a struggling individual’s unfulfilled yearnings.

Alternative healing arts can support a positive vision which can heal wounds that dominate an alcoholic’s or violent person’s life before something compels them to cause irreparable harm to the self or another. This work is tougher and often goes deeper than psychiatric counseling, but it is essential.

Picture below from Sherwins Facebook page. Ted Kennedy and Sherwin. 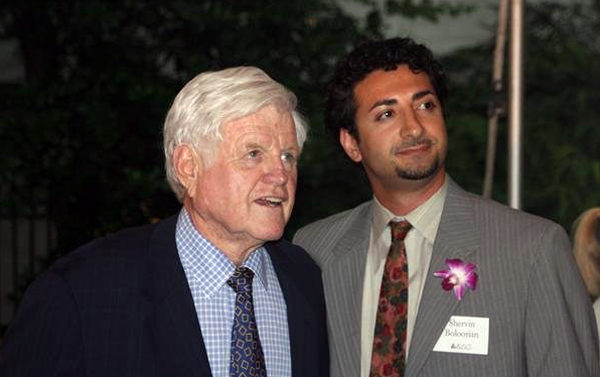 The Empire and the Battle for the Human Soul

Singer Dave Stringer And The Unifying Power of Chant

Shervin Boloorian: The Subconscious Power of 9/11

Thanks Shervin for bringing soul into the conversation. I too see that it is deep personal emotional distress on the soul level that leads people to commit violent, destructive acts. They may appear to be following an intellectual ideology but at the root is a deep disturbance in the soul. Ignoring soul and spirit in our age of materialism has horrifying consequences.

Shervin! I am so glad that you’re sharing your knowledge of Shamanism with the world and in such an easy to understand format. Your political background and writing skills are delight to my reading pleasure. Thanks for bringing the soul/spirit into the picture with the recent Norway attacks. I have to curb my news diet so as to avoid feeling the pain that exists outside of my little yogic world. Take care and please keep in touch.

[…] but respect that Silvers was providing an essential inner world “soul-support” service, which I believe should be more widely accessible to members of the […]