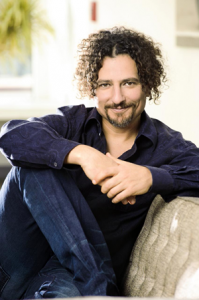 David Wolfe, best selling author and nutrition expert with 20 plus years of health, wellness and diet experience to his name, is coming to Sweden this week. An American national, Wolfe founded the international Longevity Now Conference and he has appeared on CNN, NPR and Huffington Post. Wolfe will travel to Gothenburg and Stockholm this month (October 20-21) to deliver his first ever seminars here.

Interviewer: Shervin Boloorian. I was granted a pre-Holy Flow tour interview with Wolfe for NewsVoice, to get some answers about his points of view, his principals and his plans. This is part two of a three part interview series.

DW: I support the concept. Somehow the structures of medicine and the way we deal with illness and disease have left out the most basic rudimentary idea: You Are What You Eat.  It’s a personal choice to explore the depth of how far this phrase goes—I’ve been exploring it with everything I’ve got for 20 years. But society sets the bar. There’s nothing that affects you more than the food you’re eating on a daily basis. Diet impacts people all day long every single day.

Shervin: What do you think of EU food standards compared to US ones?

David Wolfe: Generally Europeans are healthier and much more connected to real food and slow food. There’re better opportunities there which Americans have a tougher time with.

Shervin: Is this because of poor US government oversight?

David Wolfe: That’s a big part of it.Americais a nutrition wasteland. You’ll find debris of the most unbelievably toxic types in the foods there. There’s also a bigger disconnect between producer and consumer there that is changing. When you’re more connected to the foods you eat, you’re more connected to the earth. And we need more cultivation of the earth, more fresh, organic crops to replace the homogenized genetically modified hybridized ones.

Shervin: I experienced the medical benefits of cutting back on cooked food—But I only took a raw diet seriously after my health tanked. Is this the norm?

David Wolfe: It’s a crisis of education. There’s not enough reliable information available, but there’s major change afoot. What’s causing it is all the ill health. People are becoming more and more health and diet conscious out of necessity and the medical industry has to start taking notice.

Shervin: Some find too many drawbacks with Organic live food or raw food production?

David Wolfe: It’s not perfect, but it’s better than the conventional food industry. When you consider water, fresh produce, and local superfood products as the essential ingredients of life, it’s doesn’t take much for people to see that this stuff affects them positively. You feel it and it overcomes the fringe thing.

David Wolfe: I don’t believe that a couple of pills are a lasting solution. Of course, it depends on a person’s situation and health status—a perfectly healthy 20 year old—doesn’t need supplements. Later in life they may become mineral deficient. There are also genetic considerations, so there’s no easy answer. But by setting up a food and nutrition program whereby you can receive the “life force factor”; energy that is coming through raw food, then there’s a pulse of life coming into you that adds vitality like nothing else. I’m completely amazed that people can live without live food.

David Wolfe will be in Stockholm and Gothenburg this week. Watch this space in the coming days for the final Q and A with Wolfe, which covers the extent to which Food Matters? and visit www.davidwolfeeurope.com for more details or to purchase tickets!