The Administrative Court of Berlin has decided that the German parliament, the “Deutsche Bundestag”, has to give access to a so far secret official report compiled by the “Scientific Research Service of the German parliament” on demand of delegates on the question of the government’s knowledge and studies about UFOs and extraterrestrial life.

The parliament has appealed against the decision.

“The right of access to official information under the German Freedom of Information Act (Informationsfreiheitsgesetz, IFG) also applies to studies and reports of the ‘Scientific Research Service of the Bundestag”.

In it’s pressrelease the Administrative Court explained further, that the judges did not agree with this claim of the parliament and therefore did not followed the complaint upheld by the Bundestag and instead ordered that it must give the claimant insight into the secret report.

The court also denied the claim that such a process would represent a violation of the intellectual property of the ‘Scientific Research Service of the Bundestag’ or the Bundestag itself, as claimed by the Bundestag at court. While the court confirmed that the Bundestag and its scientific service is the owner of the copyright and the right of the first publication (Erstveröffentlichungsrecht) the ordered insight for the claimant would not breach the copyright as the claimant does not want to publish or market, but simply wanted to read it.”

While the court ordered the described insight into the paper, in face of the fact that the decision has a fundamental importance for the question of how to deal with reports by the scientific service, it also allowed the Bundestag to apply for appeal at the Supreme Administrative Court of Berlin-Brandenburg, a step that under German law is only granted if the law is not explicit.

Observers speculate that the persistence with which the Bundestag denied and still tries to deny the insight into the UFO-paper, or even it’s publication, is not so much about the treated subject (in this case UFOs and extraterrestrial life), but in general about questions of dealing with reports and papers by the “Scientific Research Service of the German Bundestag” in the future and in the face of the freedom of information act in general.

Beside stating, that because so many other NATO members, partners and neighbouring countries – such as France, the USA, Belgium, the United Kingdom and Italy (to name only a few) – did investigate UFOs, it is “more than likely that also official German authorities and Departments dealt with this questions (about the existence of UFOs and extraterrestrial life)”, the report does not reveal any secrets about UFOs and alien life, nor a secret knowledge about it by the German government. 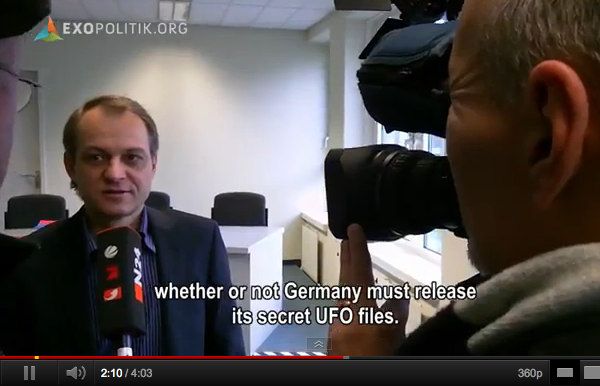