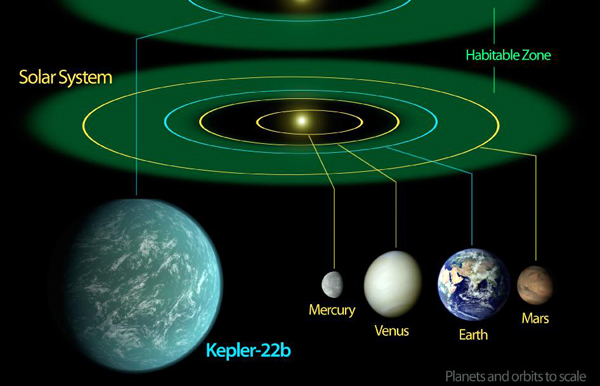 Guardian.co.uk: Nasa discovers planet that is about 2.4 times the size of our own and lies in the ‘Goldilocks zone’ of its solar system.

A new planet outside Earth’s solar system has been identified with many similarities to our own – making it the latest best potential target for life. Kepler 22-b, which is about 2.4 times the size of Earth and lies in the so-called “Goldilocks zone”, has a relatively comfortable surface temperature of about 22C (72F) and orbits a star not unlike Earth’s sun.

Wikipedia: The discovery was announced December 5, 2011. The planet’s radius is roughly 2.4 times the radius of Earth; it is 600 light years away from Earth, in orbit around the G-type star Kepler 22.