“Social media expert Pamela Meyer can tell when you’re lying. If it’s not your words that give you away, it’s your posture, eyes, breathing rate, fidgets, and a host of other indicators. Worse, we are all lied to up to 200 times a day, she says, from the white lies that allow society to function smoothly to the devastating duplicities that bring down corporations and break up families.”

“Working with a team of researchers over several years, Meyer, who is CEO of social networking company Simpatico Networks, collected and reviewed most of the research on deception that has been published, from such fields as law-enforcement, military, psychology and espionage.”

“She then became an expert herself, receiving advanced training in deception detection, including multiple courses of advanced training in interrogation, microexpression analysis, statement analysis, behavior and body language interpretation, and emotion recognition. Her research is synthetized in her bestselling book Liespotting.”

“How much deceit do we encounter? On a given day, studies show, you may be lied to anywhere from 10 to 200 times. Now granted, many of those are white lies. Another study showed that strangers lied three times within the first 10 minutes of meeting each other.” … “Detecting lies, or “lie spotting,” is an essential skill for everyone to acquire, for both personal and professional reasons”. Source: How to spot a lie CNN

“Paul Ekman’s research on facial expression and body movement began in 1954. In his early work, his approach to nonverbal behavior showed his training in personality. A social psychological and cross-cultural emphasis characterized his work, with a growing interest in an evolutionary and semiotic frame of reference. In addition to his basic research on emotion and its expression, he has, for the last thirty years, also been studying deceit.” 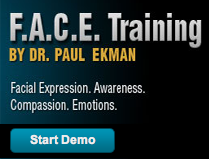