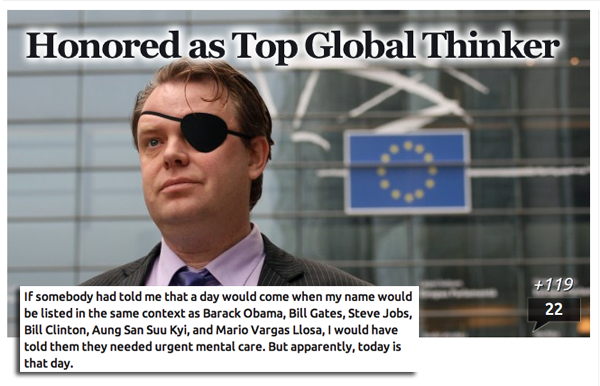 Foreign Policy is honoring me as one of the world’s 100 most important thinkers this year. I’m a bit taken aback by that, Rick Falkvinge says, the founder and chief evangelist of the growing global Pirate Party movement.

Foreignpolicy.com specializes in high-level global policy and ideas, has long been one of Falkvinge’s favorite magazines for its deep level of insight into root causes and worldwide trends. Foreign Policy has only had one ad, ever. It said “We confess. Some of our articles are written by secretaries”. Hillary Clinton is a frequent contributor to the magazine’s analysis.

Foreignpolicy.com every year publish a list of the “top 100 global thinkers”, people whose ideas shape our society and future. This year Rick Falkvinge is number 98.

“In this context, it must be said that I really see this as the ideas getting recognition at the highest level, rather than me personally. There are tens of thousands of activists that share, carry, and contribute to the ideas, and this is recognition for all of them and what they believe in. I wouldn’t have been honored like this without being one of them, of course.”

“A former software entrepreneur and Microsoft employee, Falkvinge founded the original party in Sweden in 2006. It rose to prominence following a government crackdown on the Pirate Bay file-sharing site, and Pirate parties are now active in more than 25 countries.”

“Indeed, 2011 may be remembered as the year Falkvinge’s big idea broke through into the public consciousness. His Pirates still aren’t exactly mainstream, but the issues they focus on — government transparency, Internet privacy, and copyright law — are very much in the zeitgeist, and their ranks are growing.” Source: www.foreignpolicy.com

Rick Falkvinge  went to Washington, DC to collect his award at the ceremony gala. He will be back in Europe on December 4.

Carl Bildt: Total surveillance doesn’t harm freedom of speech, because it is covert

Rick Falkvinge: EEA to Revoke US Citizenship Without Due Process

Rick Falkvinge: George Orwell was an optimist when he wrote 1984