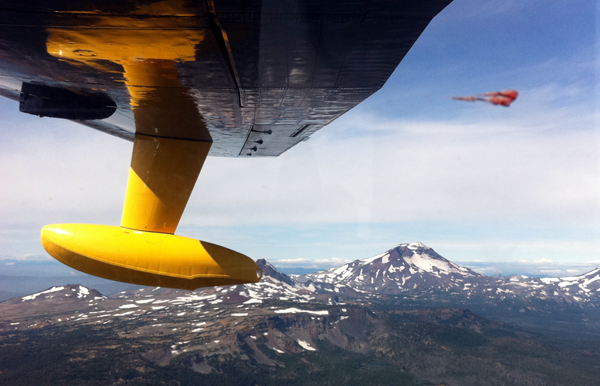 A sighting report, and several interesting photographs, from a very experienced airline pilot, who inadvertently captured a very strange, high-speed, object with his camera, as he was flying his Grumman “Albatross from Seattle to Los Angeles on September 16, 2011 was documented.

“We were in the vacinity of Bend or Sisters Oregon”.

“I am an airline transport pilot with over 14,000 flight hours in unique aircraft such as the HU16b that I am flying in these pictures. I am also a certified A&P mechanic and an IA or inspector. The Albatross we have is used as a test bed for Satellite broadband internet. We are one of the few companies in the world that has airborne satellite systems for high-speed internet my plane is full of sophisticated equipment+.”

“I have better than 20/20 vision and I usually can spot any balloon from a great distance and I am trained to do so. I see them all the time. The object was literally a blur and I didn’t see it as it was moving in the same direction as my plane. I took three pictures with my iphone as I was just trying to get a shot of “Sisters” and Mount Jefferson. The plane cannot be a balloon cluster as this thing passed us. In our opinion, the object appears to be reminiscent of an SR-71, but they are not painted orange. If anyone can identify let us know.”