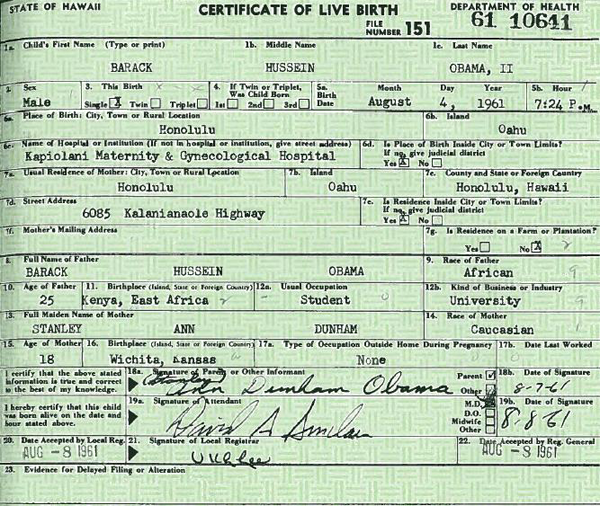 On April 12, 2012, Alexandra Hill – the attorney for Mr. Obama in New Jersey – told the presiding judge in open court that Barack Obama’s birth certificate is a forgery.

Ms. Alexandra Hill, an associate attorney at Genova, Burns & Giantomasi Attorneys in Newark, told the judge that Barack Obama’s birth certificate is such a poor forgery that it should be thrown out as evidence. In other words, the fake birth certificate can’t be used to prove that Mr. Obama is not a natural-born citizen, because it is a fake birth certificate. The full details of the case are here.

It gets even worse. Ms. Hill then argued that the judge should not look to petty nuisances such as the United States Constitution to determine Barack Obama’s eligibility to be on the ballot. She told the judge that Mr. Obama’s political popularity is all that is necessary to determine his validity as a candidate. She also argued that the fact that he was elected once already (fraudulently) automatically places him on the ballot by default. She stated, “No law in New Jersey obligated him to produce any such evidence in order to get on the primary ballot.”

In spite of the bombshell admission, no mainstream news outlet has covered what happened at the trial yet. Judge Jeff Masin blocked the case and basically told the plaintiffs that it’s now up to the New Jersey Secretary of State to decide the issue of Mr. Obama’s eligibility.

Mario Apuzzo, the attorney for the plaintiffs, had this to say about the incident:

“Upon my request that she so stipulate, Obama’s lawyer agreed during the trial that there was absolutely no evidence before the court as to who Obama is or where he was born, including excluding from evidence the internet image of Obama’s alleged Certificate of Live Birth he released on April 27, 2011. The ALJ confirmed that to be the case. “