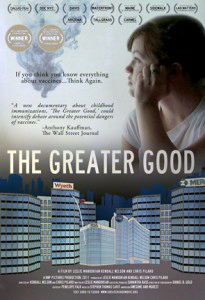 THE GREATER GOOD is a character-driven documentary that explores the cultural intersections where parenting meets modern medicine and individual rights collide with politics. The film offers parents, doctors and policy makers a safe space to speak openly, actively listen and to learn from one another. Mixing verité footage, intimate interviews, 1950s-era government-produced movies and up-to-date TV news reporting.

The film weaves together the stories of families whose lives have been forever changed by vaccination.

The documentary interviews leading authorities on vaccines and vaccine safety. Equal consideration is given to the doctors and scientists who advocate for universal vaccination as to those who persistently ask probing questions about regulation and administration.