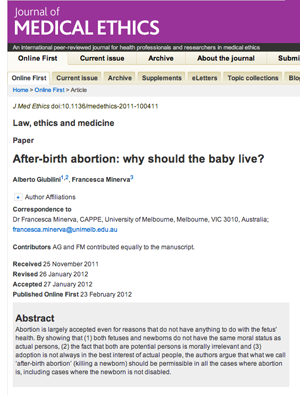 According to Alberto Giubilini and Francesca Minerva, “after-birth abortion” sometimes called “infanticide” is proposed as a form of “contraception” that would allow babies to be killed after they are born. In order to do that the scientists suggest that newborns don’t have the same moral status as actual persons. It’s probably not necessary to mention here, but the nazis had the same thoughts.

In a paper published in the Journal of Medical Ethics:

“When circumstances occur after birth such that they would have justified abortion, what we call after-birth abortion should be permissible…We propose to call this practice ‘after-birth abortion’, rather than ‘infanticide,’ to emphasize that the moral status of the individual killed is comparable with that of a fetus… rather than to that of a child. Therefore, we claim that killing a newborn could be ethically permissible in all the circumstances where abortion would be. Such circumstances include cases where the newborn has the potential to have an (at least) acceptable life, but the well-being of the family is at risk.”

Abortion is largely accepted even for reasons that do not have anything to do with the fetus’ health. By showing that

(1) both fetuses and newborns do not have the same moral status as actual persons,

(3) adoption is not always in the best interest of actual people, the authors argue that what we call ‘after-birth abortion’ (killing a newborn) should be permissible in all the cases where abortion is, including cases where the newborn is not disabled.

Paper: After-birth abortion: why should the baby live? from The Journal of Medical Science

Severe abnormalities of the fetus and risks for the physical and/or psychological health of the woman are often cited as valid reasons for abortion. Sometimes the two reasons are connected, such as when a woman claims that a disabled child would represent a risk to her mental health. However, having a child can itself be an unbearable burden for the psychological health of the woman or for her already existing children, regardless of the condition of the fetus. This could happen in the case of a woman who loses her partner after she finds out that she is pregnant and therefore feels she will not be able to take care of the possible child by herself.