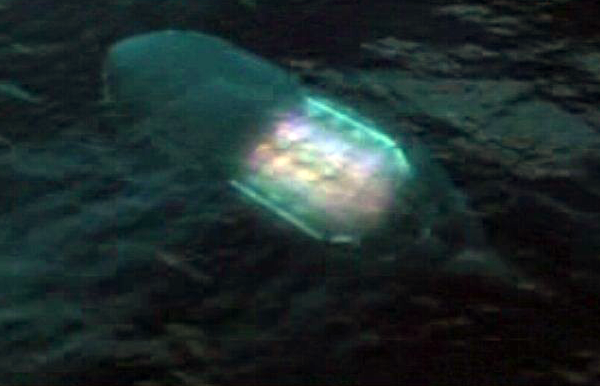 Picture from History Channel. The object has nothing to do with this case.

UFO experts have pondered since 1980. What was the flying object that landed and disappeared in a lake in Muddus National Park of northern Sweden. Now the national association UFO Sweden (RUFOS) will try to solve the mystery. On Thursday August 30, 2012 a group of fifteen researchers will start diving for the craft.

On 31 July 1980, Liz Berg was out walking with her current husband Bo in Muddus National Park.

“We were 21 years old then and had been out for five days on our first hike. Muddus National was a relatively new national park then. In the morning we sit and rested near a lake. When we hear a whining sound and see that there’s a rocket shaped objekt over the lake. It makes a turn and come towards us, then lands and sinks into the lake.”

Liz and Bo got really scared and immediately packed up and went home directly.

“We thought it would pop. At that time it was a lot of talk about cruise missiles, as it was our first thought, says Liz.”

After the experience was Liz in touch with FOI which stands for “Swedish Defence Research Institute”, who became interested in the observation.

“We had to draw maps and images for them. Then they said they might dive for it but we heard nothing more, says Liz Berg. Months passed and Liz got no response from the FOI. After a few months, she called to ask if they found anything.”

“They said they had flown over but the water was too murky. But if they had seen something they had probably not told us, says Liz, laughing.”

Crafts landing and taking off in Sweden not so uncommon

Clas Svahn says these observations have been common. He mentioned an observation from July 6, 2012 when a missile shaped craft travelled along Kalix älv in northern Sweden.

The NewsVoice editor has been in contact with Swedish military ex personel that claims FOI been interested in these sightings for many years. They mentioned a case when a certain area was visited by strangly shaped crafts (not missile shaped) that landed and took off vertically. The crafts burned the trees, broke branches and left traces of radiation on the sites. Witnesses were examined and had high levels of white blood cells. FOI was deeply involved as well as Swedish military that was stationed in the area for a week, watching for UFOs.

The public domain was informed, that it was just a military exercise.

The editor had the opportunity to have a look at some of the classified military reports.

If you are ex military, please feel free to contact NewsVoice and tell more about any case of your choice.