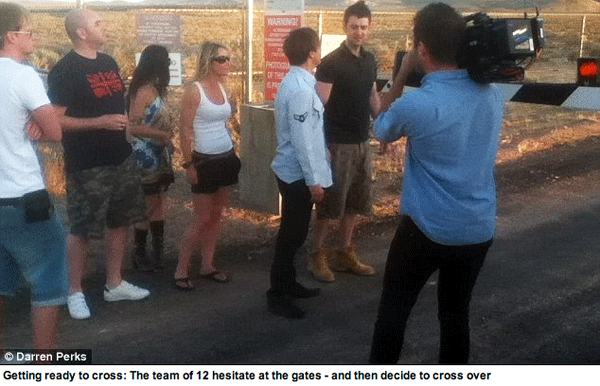 A film crew from the British broadcasting network, BBC was arrested at gunpoint for sneaking into a top-secret military base in the United States.  Heavily armed guards forced the crew members to lie face-down for three hours while the FBI ran security checks on them. Apache helicopters were called in and Washington phoned London after trespass.

The 12-man crew visited the infamous Area 51 in the Nevada desert, where it is claimed bodies of alien astronauts from 1947 are stored, that the unit wanted to use for making a documentary, The Sun reports.

The BBC team, including standup comedian Andrew Maxwell, ignored all warnings, and slipped past the security limit.

Military cops surrounded them within minutes. Darren Perks, 34, said one of the cops said:

“Listen, son, we could make you disappear and your body would never be found.”

Area 51 is really a place of lost bodies. [editor’s remark]

Torbjörn Sassersson, editor: Rewrite of texts from: The Sun and Daily Mail