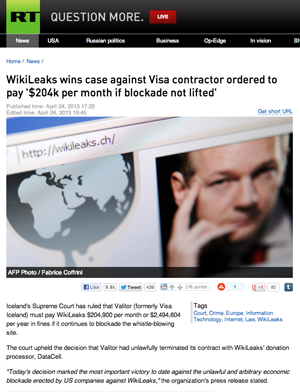 RT.com: Iceland’s Supreme Court has ruled that Valitor (formerly Visa Iceland) must pay WikiLeaks $204, 900 per month or $2,494,604 per year in fines if it continues to blockade the whistle-blowing site.

“The court upheld the decision that Valitor had unlawfully terminated its contract with WikiLeaks’ donation processor, DataCell.”

“Today’s decision marked the most important victory to date against the unlawful and arbitrary economic blockade erected by US companies against WikiLeaks,” the organization’s press release stated.