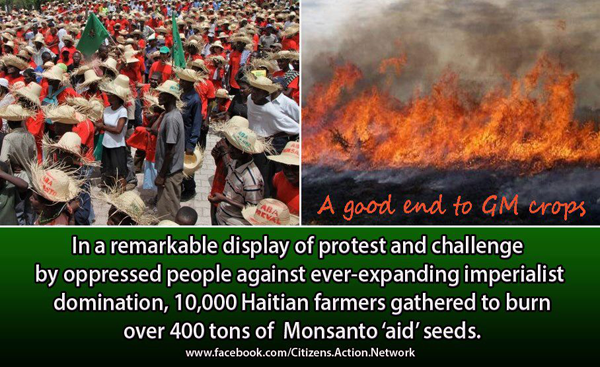 Hungary decided to eliminate all plantations using GMO seeds from Monsanto. According to the Minister of Rural Development Lajos Bognar, around 500 hectares of corn crops were burned this week – equivalent to five million square meters.

The information portal Real Pharmacy wrote yesterday (23 May), the cornfields that were destroyed were scattered around the Hungarian territory and had been recently planted.

The Hungarians were the first to take a forceful position in the European Union in relation to the use of transgenic seeds. During recent years, the government of Hungary has destroyed several plantations of crops derived from Monsanto seed. Minister Bognar says the country’s producers are required to ensure they do not use genetically modified seeds.

The European Union has a policy of free movement of products within the EU countries. Thus Hungarian authorities cannot investigate how the seeds reach their territory. However, said Lajos Bognar:

“That does not prevent us from investigating in depth the use of these seeds in our territory.”

According to the Hungarian press, the country still has thousands of similarly affected acres. Also according to the [news] portal Portugal Mundial, farmers defended themselves against the charge of using genetically modified material. They claim they did not know that the seeds were Monsanto’s.

As the fertile period for plantations is already half over, it’s too late to plant new seeds. Thus, this year’s harvest was completely lost. And to make matters worse for farmers, the company that distributed the GM seeds went bankrupt – which prevents them from receiving compensation.