Interview by Ronny Rydström with Gela Amini, one of the organizers of the march against Monsanto and GMO in Stockholm 25 maj 2013. 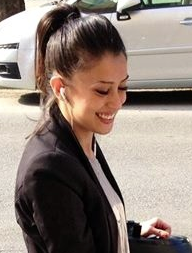 Tell me what you are doing here?

– The march against Monsanto actually started in the United States and spread all around the world. I think, if I’m not mistaken, 400 marches going on, all of them today on the 25/5 2013. We have three in Sweden – Falkenberg, Stockholm and Göteborg. We want to kick Monsanto out of Sweden. The main goal is to live as organic as possible for us to be able to be one with nature. Nobody has the right to patent nature, nobody has more right to it than anybody else. We all come from the same place, we all need to share it.

So what is wrong with GMO and Monsanto, if you would summarize it?

– For us, that is the main goal. Monsanto is patenting life, it’s a ridiculously dangerous attempt which needs everyone’s attention.We’re going to continue raising awareness on topics which affect our society and us, the people. Informing the public, that’s the most important thing right now. We have a petition for people to sign and get involved with. Although I’m sure even after all the coverage from freelance journalists, such as yourself, the mass media will continue ignoring an event which stopped traffic in over 41 different countries.

Will you have more marches here in Stockholm?

– Definitely! A lot of people have asked us to continue, many who want to get involved and work with us. All we received has been positive feedback. Like I said, six different continents are doing this so we’re all making history. We’re all doing it all around the world not just in Stockholm. Everybody’s making an effort to change our world.

– We don’t have a website just yet cause we just started recently with the marches. But we have a Facebook page. Everything will be posted there. We need to unify if we’re going to make a difference. I keep saying it, I’m going to tattoo it on myself soon – collective, collective, collective effort! That’s what it’s about.