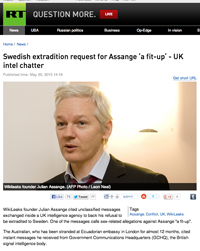 WikiLeaks founder Julian Assange cited unclassified messages exchanged inside a UK intelligence agency to back his refusal to be extradited to Sweden. One of the messages calls sex-related allegations against Assange “a fit-up”.

The Australian, who has been stranded at Ecuadorian embassy in London for almost 12 months, cited instant messages he received from Government Communications Headquarters (GCHQ), the British signal intelligence body.

One message from September 2012, which Assange read out in a Sunday night interview with Spanish TV program Salvados, says: “They are trying to arrest him on suspicion of XYZ … It is definitely a fit-up… Their timings are too convenient right after Cablegate.”

Another conversation he cited goes: “He reckons he will stay in the Ecuadorian embassy for six to 12 months when the charges against him will be dropped, but that is not really how it works now is it? He’s a fool… Yeah… A highly optimistic fool.”