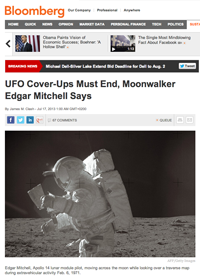 BLOOMBERG. On Feb. 5, 1971, Edgar Mitchell became the sixth of only 12 men to step on the moon. Of that elite dozen, which included Buzz Aldrin and the late Neil Armstrong 44 years ago this week, Mitchell is the only one to go on record about his controversial belief in extraterrestrial UAP:s and of a possible government cover-up.

“Mitchell, 82, is no dummy. While on active duty as a test pilot for the U.S. Navy, he completed an M.S. in aeronautical engineering at the U.S. Naval Postgraduate School and a doctorate in aeronautics at the Massachusetts Institute of Technology. Mitchell also served in combat during the Korean War as a fighter pilot. In 1970, he was awarded the Presidential Medal of Freedom.”