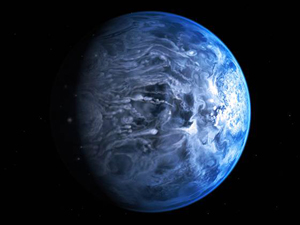 For the first time, astronomers have detected the color of a planet beyond our solar system: It’s blue, but not because there’s water on its surface. It doesn’t even have a “surface.” Instead, the color is thought to come from glassy grains of silicate in its atmosphere.

The planet, known as HD 189733b, is a blazing hot gas giant circling a star 63 light-years from Earth in the northern constellation Vulpecula.

Guardian: “Most Earth-like planet ever discovered could be a cosy home for alien life”