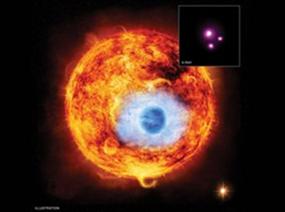 NASA’s Chandra Sees Eclipsing Planet in X-rays for First Time. This graphic depicts HD 189733b, the first exoplanet caught passing in front of its parent star

For the first time since exoplanets, or planets around stars other than the sun X-ray observations have detected an exoplanet passing in front of its parent star. An advantageous alignment of a planet and its parent star in the system HD 189733, which is 63 light-years from Earth, enabled NASA’s Chandra X-ray Observatory and the European Space Agency’s XMM Newton Observatory to observe a dip in X-ray intensity as the planet transited the star.

“Thousands of planet candidates have been seen to transit in only optical light,” said Katja Poppenhaeger of Harvard, who led a new study to be published in the Aug. 10 edition of The Astrophysical Journal. “Finally being able to study one in X-rays is important because it reveals new information about the properties of an exoplanet.”

The planet, known as HD 189733b, is similar in size to Jupiter but has a very close orbit around its star of once every 2.2 days. HD 189733b has blue in color as a result of the preferential scattering of blue light by silicate particles in its atmosphere. “The X-ray data suggest there are extended layers of the planet’s atmosphere that are transparent to optical light but opaque to X-rays.