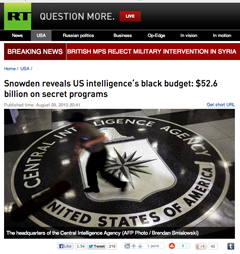 RT.COM. Former intelligence contractor Edward Snowden has leaked a new top-secret document that for the first time ever publically discloses how the United States spends tens of billions of dollars annually on clandestine spy programs.

“The Washington Post revealed the so-called “black budget” on Thursday and reports that $52.6 billion was set aside for operations in fiscal year 2013.”