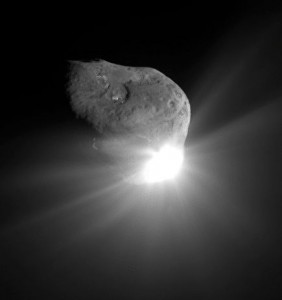 Nationalgeographic.com: Launched in 2005, the spacecraft memorably smashed a copper-jacketed probe into the comet Tempel 1 at 22,800 miles an hour (36,700 kilometers an hour) on July 4 of that year. It then flew through the debris cloud to capture the resultant fireworks, the first close inspection of a comet’s interior. (See “‘Deep Impact’ Comet Revealed by NASA Flyby.”)