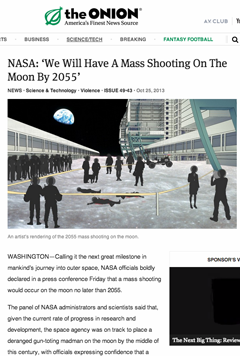 WASHINGTON—Calling it the next great milestone in mankind’s journey into outer space, NASA officials boldly declared in a press conference Friday that a mass shooting would occur on the moon no later than 2055.

The panel of NASA administrators and scientists said that, given the current rate of progress in research and development, the space agency was on track to place a deranged gun-toting madman on the moon by the middle of this century, with officials expressing confidence that a double-digit body count on the lunar surface would be a reality within the majority of Americans’ lifetimes.