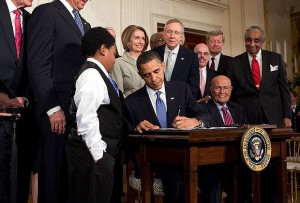 A man who attempted to sign up for Obamacare online was told that a fine of over $4, 000 dollars a year for refusing to take out mandatory health insurance could be taken directly from his bank account, and that his drivers license would be suspended and a federal tax lien placed against his home, according to an entry on the HealthCare.gov Facebook page.

If true, the implementation of Obamacare is going to be a whole lot more draconian than Americans have been led to believe.