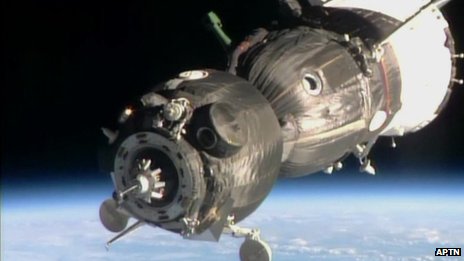 A Soyuz rocket carrying the torch for the Sochi Winter Olympics has docked with the International Space Station, as part of efforts to showcase next year’s games in Russia.

“The crew for the historic 38/39 mission on the International Space Station consist of commander Mikhail Tyurin of Roscosmos, Rick Mastracchio of NASA and Koichi Wakata of Japan’s JAXA.”

“The veteran astronauts, who spent two-and-a-half years preparing for the flight, took part in the torch relay on Earth, taking the Sochi Olympic flame from their hotel to the bus which delivered them to the launch pad to transfer the torch to the ISS and bring it back to Earth.”

“On Saturday, two Russian cosmonauts will take it on a historic first spacewalk. The torch will not be lit.”