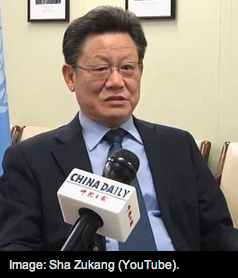 InfoWars. Former Chinese Ambassador to the United Nations Sha Zukang has warned that the dispute between Japan and China over the Senkaku Islands could lead to World War III.

Citing a Chinese-language piece written by Zukang for the the pro-regime Global Times,  a report in the China Times says that Zukang warned of the futility of going to war over “those two tiny rocks, ” a reference to the disputed islands which have become the center of a geopolitical tug of war between China and Japan, with the United States and South Korea also becoming embroiled.

“If China started a war with Japan, it would be much larger than both the Sino-Japanese War and World War II, said Sha. The United States and Japan should cooperate with China to maintain regional peace,” states the report.