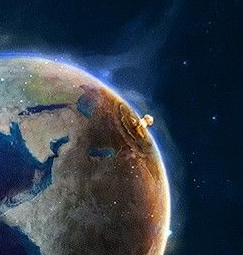 InfoWars. A display to promote China’s Jade Rabbit Moon rover includes a background photograph of a mushroom cloud over Europe, a startling detail which some have interpreted as an indication that Beijing’s space program is a cover for the militarization of space.

“The image, which was used as a backdrop at an exhibit for China’s recently deployed Yutu Rover, clearly shows a nuclear explosion occurring over eastern Europe, with some speculating that the location eerily matches that of the planned U.S. missile defense system in Romania. The photograph was not designed deliberately for the moon rover display, it is taken from a stock image. This fact has been cited by those who claim that the selection of the image was a mere oversight on behalf of Chinese officials.”

“However, the title of the stock image, Nuclear Explosion on Earth from Space, has prompted more cynical observers to suggest otherwise.”