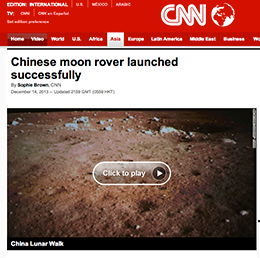 “Jade Rabbit (called Yutu in Chinese) is a six-wheeled lunar rover equipped with at least four cameras and two mechanical legs that can dig up soil samples to a depth of 30 meters.

The solar-powered rover will patrol the moon’s surface, studying the structure of the lunar crust as well as soil and rocks, for at least three months. The robot’s name was decided by a public online poll and comes from a Chinese myth about the pet white rabbit of a goddess, Chang’e, who is said to live on the moon.”