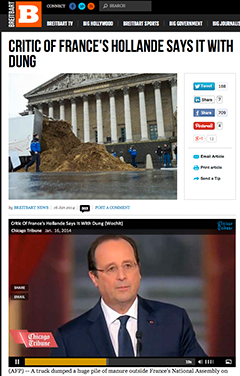 A truck driver dumped a massive pile of dung outside France’s National Assembly today in protest of the political elite, reports Agence France-Presse.

The driver of the truck — which was marked with the slogan “Out with Hollande and the whole political class!” — was apprehended by police shortly after releasing his smelly load outside the front gates of the grand Palais Bourbon that hosts the lower house Assembly, writes Breitbart.com