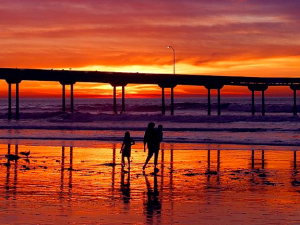 IntelliHub. It looks as if radiation from the damaged Fukushima Nuclear Plant has finally reached California in dangerous doses as health officials struggle to maintain order.

According to a recent report, health officials in California have denounced a YouTube video released on Dec. 23, which clearly shows a Geiger counter reaching alarm levels of up to 128 CPM on the beach.

Considering that the readings are 5 times higher than normal background levels, it only stands to reason that the accumulative radiation is indeed causing harm to living things including humans who wish to lollygag around at “surfers beach”.