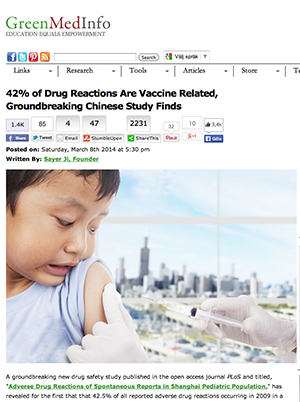 A groundbreaking new drug safety study published in the open access journal PLoS and titled, “Adverse Drug Reactions of Spontaneous Reports in Shanghai Pediatric Population, ” has revealed for the first that that 42.5% of all reported adverse drug reactions occurring in 2009 in a Chinese pediatric population (Shanghai, pop of 17 mil) were caused by vaccines, with reactions as severe as anaphylaxis and death.

The report carries unique gravitas insofar as the data was gathered through spontaneous reports of physicians (52.03%), pharmacists (24.27%) and other health care practitioners (15.46%), with only 2.52% coming from ‘consumers.’ Presumably, the clinical training of those reporting gives the study additional credibility.

Sayer Ji is the founder of GreenMedInfo.com, an author, researcher, lecturer, and an advisory board member of the National Health Federation.  His writings have been published and referenced widely in print and online: Truthout, Mercola.com, New York Times online, The Journal of Gluten Sensitivity, New York Times  and The Well Being Journal.