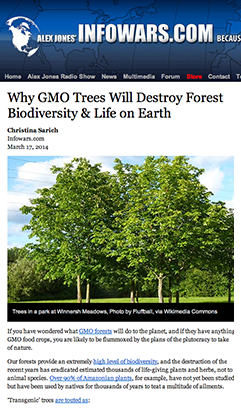 INFOWARS. If you have wondered what GMO forests will do to the planet, and if they have anything in common with GMO food crops, you are likely to be flummoxed by the plans of the plutocracy to take all of the ‘natural’ out of nature.

Our forests provide an extremely high level of biodiversity, and the destruction of the Amazon forests in recent years has eradicated estimated thousands of life-giving plants and herbs, not to mention diverse animal species. Over 90% of Amazonian plants, for example, have not yet been studied by western science, but have been used by natives for thousands of years to teat a multitude of ailments.

Whether it is food crops, fuel crops, or now, our forests, GMO is a haphazard and money-grabbing tactic for corporate interests to continue their aggressive and life-killing habits of ruining human, animal and plant health.