Vice News reports: Last week, Ukraine launched an anti-terror campaign to recapture the cities being occupied by pro-Russia protesters. So far, the campaign hasn’t been going so well.

On April 16, the second day of the campaign, Ukrainian military moving into Sloviansk — the focal point of the pro-Russia forces — and gave up their equipment. The armory was brought to the center of town where it has become a local amusement.

Elsewhere, crowds of pro-Russia protesters stopped a column of Ukrainian troops in Kramatorsk and made them disarm. VICE News correspondent Simon Ostrovsky was on the scene as Ukrainian forces disarmed their weapons and vehicles. 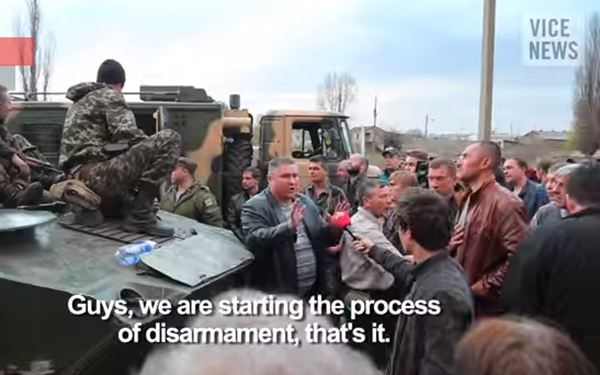 Robert Parry: What did US Spy Satellites see in Ukraine?