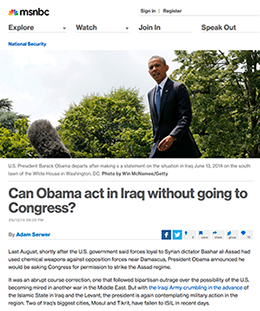 “Legally the president doesn’t necessarily need congressional authorization to provide assistance to an ally who is under attack, ” said an aide to the Senate Armed Services Committee. Though U.S. forces withdrew from Iraq in 2011 after a U.S.-Iraq security agreement was not renewed, the U.S. still maintains certain security-related commitments to Iraq. “Presidents have constitutional authority to act as commander in chief, and we have some existing legal arrangements with the Iraqis that the president doesn’t need congressional authorization to live up to.”