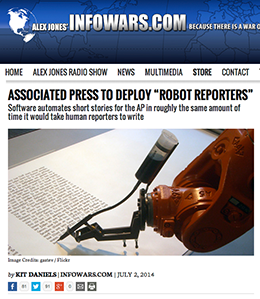 The Associated Press has announced it will begin using automation technology to write business news reports, a development which likely foreshadows a future mainstream media dominated by computer “reporters.”

The AP recently said that data provided by Zachs Investment Research will be funneled into software developed by Automated Insights which will then automate short stories for the AP in roughly the same amount of time it would take its human reporters to write.