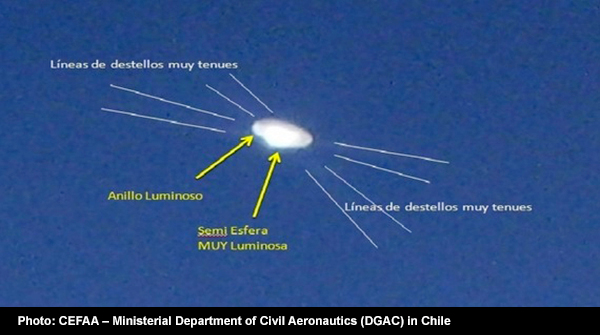 The government office investigating UPA:s [Unidentified Aerial Phenomena] in Chile has released an analysis of two high quality photos showing what appear be genuine unidentified flying objects above a remote copper mine.

The office, known as the  Committee for the Studies of Anomalous Aerial Phenomena (CEFAA), is located within the Ministerial Department of Civil Aeronautics (DGAC), the equivalent of our FAA, under the jurisdiction of the Chilean Air Force. It is responsible for the analysis of selected reports of unexplained aerial phenomena in Chilean airspace, most of them from pilots and aviation personnel.

The photos were taken at the Collahuasi copper mine, more than 14,000 feet above sea level in the Andean plateau in the far north of Chile. An extremely remote location with low oxygen levels and unusually clear skies, the area is desolate and inhospitable. The Collahuasi mine produces copper concentrate, copper cathodes and molybdenum concentrate from three open-pit mineral deposits. (Click here for a map).

Four technicians – professionals specializing in electricity, electronics, and fluid control – were working there in April, 2013. They witnessed a disc-shaped object which approached slowly and was present for more than an hour, moving around in different positions and hovering at about 2000 feet. One technician took pictures with his Kenox Samsung S860 camera. The strange object made no sound, and eventually moved away towards the East.