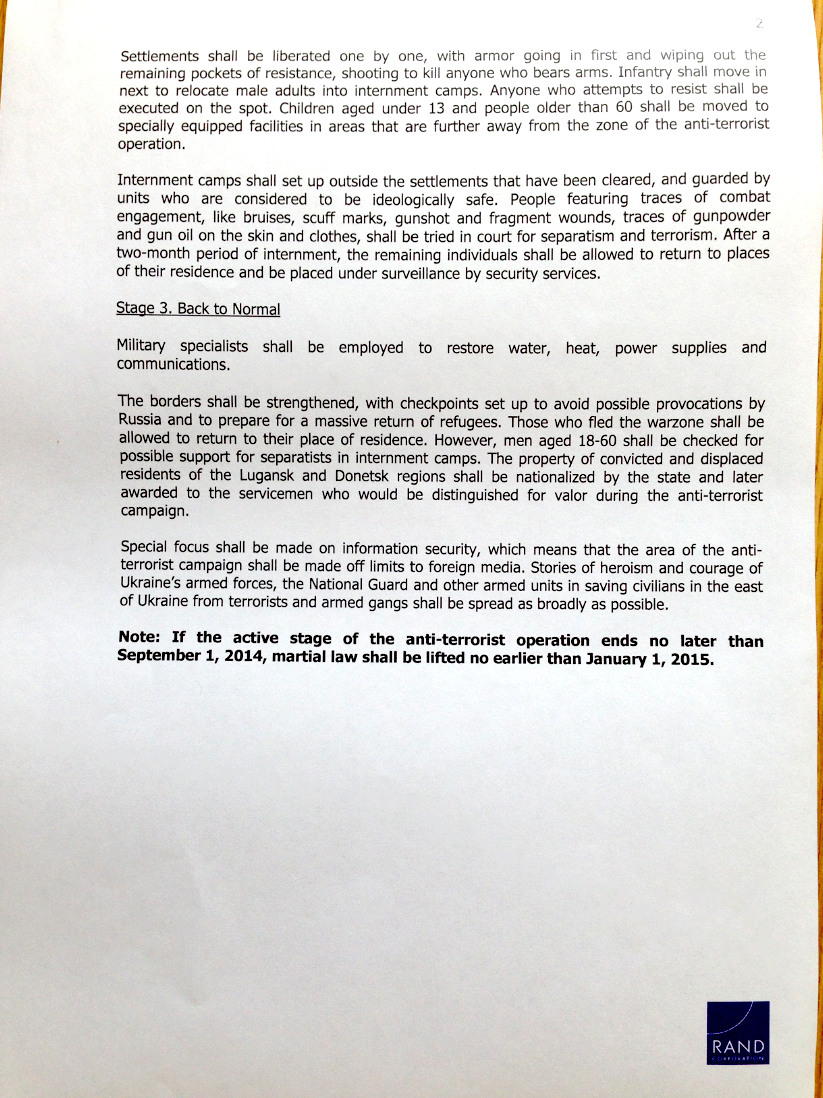 This alleged leaked Rand Corporation classified memo is claimed to be leaked to the internet on July 3, 2014. RT.com seem to be the first international media outlet to pick this up and write about it. NewsVoice decided to publish the original document in plain text format. NewsVoice cannot at this moment confirm the authenticity of the document. / The editor

“A leaked memorandum from the RAND corporation think tank suggests that Kiev should engage in an all-out war in the eastern regions, including shutting down all communications, putting citizens in internment camps and killing all who resist.” / RT.com

In case further negotiation with southeast Ukrainian insurgents should prove futile, the only practicable solution should be a swift crackdown on the separatists and terrorists, to be undertaken irrespective of public opinion or operation costs. Procrastination would dramatically reduce the operation’s chances of success. Possible political and material downsides of an operation should be greatly outweighed by the following probable gains:

The Presumable Stages of a Military Operation

Stage One: Total isolation of the rebel region

Considering that any resident of the Donetsk Region and the Lugansk Region has had enough time and opportunities to leave the area of hostilities provided that they wanted to do so, anyone who has stayed behind should be regarded as complicit in the unrest, or supportive of it.

Martial law shall be introduced in the defiant regions. All local authorities shall have their competencies terminated, the Constitution shall be suspended. Direct presidential rule shall be imposed.

The region shall be encircled with troops and sealed off entirely from any flow of goods and persons, both incoming and outgoing. Special attention shall be given to areas that border on Russia. Broadcasting services, Internet connection, telephone and mobile communications in the region shall be shut down. A curfew shall be imposed between 20:00 and 06:00. International media staff working In the region shall be subject to a special procedure.

The circle of troops around the rebel region shall be tightened gradually. Ground assaults shall be preceded by air strikes against the enemy’s strategic facilities, artillery and mortar teams, and bunched-up troops. The use of non-conventional arms shall not be ruled out in certain cases in order to ensure smaller causalities among our own personnel.

Settlements shall be liberated one by one, with armor going in first and wiping out the remaining pockets of resistance, shooting to kill anyone who bears arms. Infantry shall move in next to relocate male adults into internment camps. Anyonw who attempts to resist shall be executed on the spot. Children aged under 13 and people older than 60 shall be moved to specially equipped facilities in areas that are further away from the zone of the anti-terrorist operation.

Internment camps shall set up outside the settlement that have been cleared, and guarded by units who are considered to be ideologically safe. People featuring traces of combat engagement, like bruises, scuff marks, gunshot and fragment wounds, traces of gunpowder and gun oil on the skin and clothes, shall be tried in court for separatism and terrorism. After a two-month period of internment, the remaining individuals shall be allowed to return to places of their residence and be placed under surveillance by security services.

Stage 3: Back to Normal

Military specialist shall be employed to restore water, heat, power supplies and communications.

The borders shall be strengthened, with checkpoint set up to avoid possible provocations by Russia and to prepare for a massive return of refugees. Those who fled the warzone shall be allowed to return to their place of residence. However, men aged 18-60 shall be checked for possible support for separatists in internment camps. The property of convicted and displaced residents of the Lugansk and Donetsk regions shall be nationalized by the state and later awarded to the servicemen who would be distinguished for valor during the and-terrorist campaign.

Special focus shall be made on information security, which means that the area of the anti-terrorist campaign shall be made off limit to foreign media. Stories of heroism and courage of Ukraine’s armed forces, the National Guard and other armed units in saving civilians in the east of Ukraine from terrorists and armed gangs shall be spread as broadly as possible.

Note: If the active stage of the anti-terrorist operation ends no later than September 1, 2014, martial law shall be lifted no earlier than January 1, 2015. 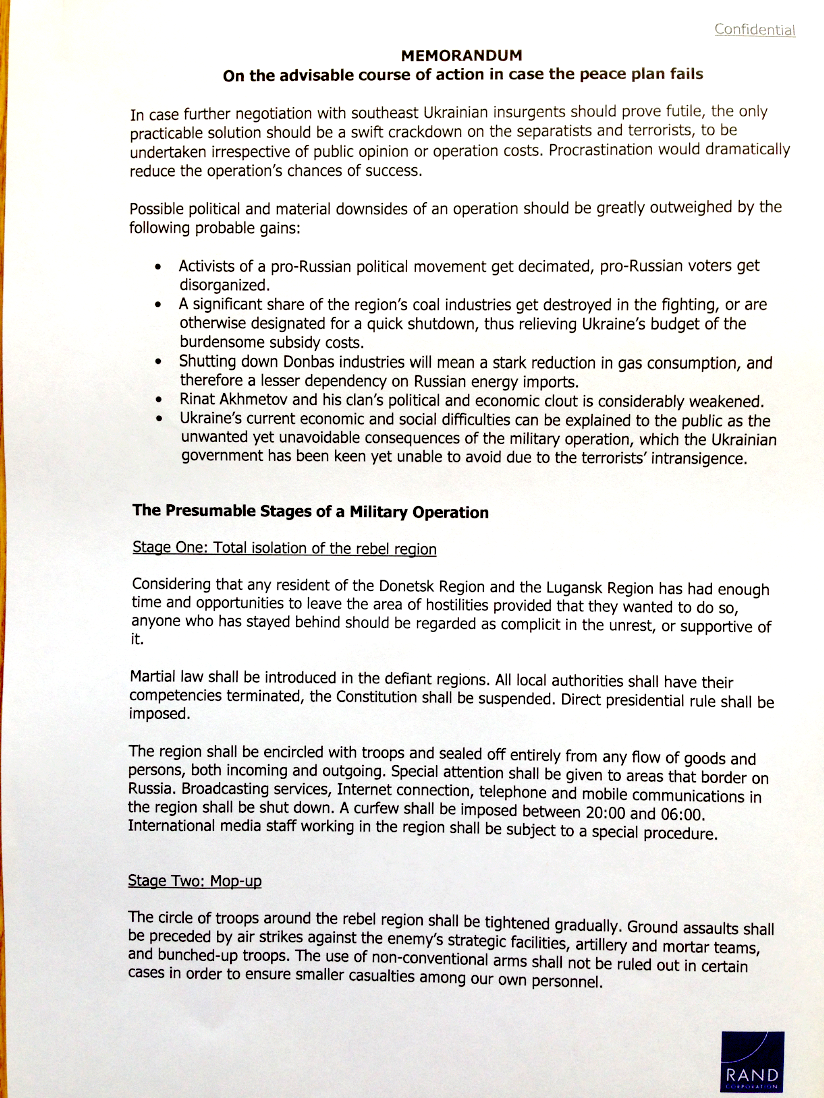 GR Editor’s Note: This report remains to be confirmed. So far we have not been able to corroborate this report from other news sources.

Some media outlets have circulated a memo purportedly prepared by the RAND Corporation regarding military operations in eastern Ukraine. RAND has produced no such document.

RAND Corp. is hired by Washington insiders to play games for them, indicating that despite all the money spent on national security and intelligence the US government is not up to the task, Chronicles magazine’s Srdja Trifkovich told RT.

A confidential document on Ukraine by the RAND Corporation was leaked last week. This ‘Memorandum on the advisable course of action’ provides three stages of a military operation in eastern Ukraine, which would ensure that a peace plan confirmed by Ukrainian President Petro Poroshenko would actually fail.

No RT.com comments about that?

And now RT.com has withdrawn the story……

Was Rand scripting this too?

So far the on-the-ground scenario seems to be adhering to the Rand script. Overwhelming force being applied to ‘separatist’ strongholds. A ‘black out’ on media coverage of actual operations with only general announcements of areas ‘liberated’ and casualties. Denials of air strikes and ‘cluster’ munitions – although evidence of both exists – blaming separatists for destruction of civilian structures and civilian casualties.

It was announced to-day that ‘camps’ are being set up in the east to ‘look after’ the residents.

Observe reporting of conditions in ‘liberated’ Slavyansk – rebels “fleeing” the encircled town, flag up, that’s it.

I think you are very right. And that indicates the Rand script is very real and very much operational right now. /Editor, NewsVoice