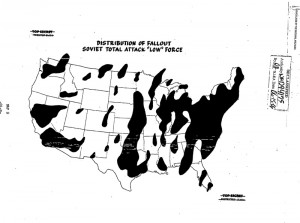 THE NATIONAL SECURITY ARCHIVE. Washington, D.C., July 22, 2014 – On the morning of 20 July 1961, while the Berlin Crisis was simmering, President John F. Kennedy and the members of the National Security Council heard a briefing on the consequences of nuclear war by the NSC’s highly secret Net Evaluation Subcommittee.

The report, published in excerpts today [22 July, 2014] for the first time by the National Security Archive, depicted a Soviet surprise attack on the United States in the fall of 1963 that began with submarine-launched missile strikes against Strategic Air Command bases.

An estimated 48 to 71 million Americans were “killed outright,” while at its maximum casualty-producing radioactive fallout blanketed from 45 to 71 percent of the nation’s residences. In the USSR and China, at the end of one month 67 and 76 million people, respectively, had been killed.

This was President Kennedy’s first exposure to a NESC report, but the secret studies of nuclear war scenarios had been initiated by his predecessor, Dwight D. Eisenhower. It may have been after this briefing, described by Secretary of State Dean Rusk as “an awesome experience,” that a dismayed Kennedy turned to Rusk, and said: “And we call ourselves the human race.”