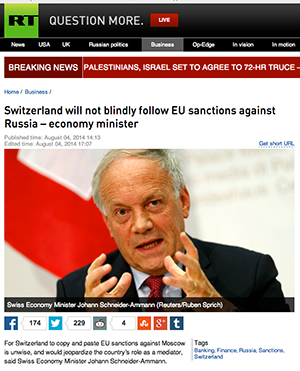 For Switzerland to copy and paste EU sanctions against Moscow is unwise, and would jeopardize the country’s role as a mediator, said Swiss Economy Minister Johann Schneider-Ammann.

The Swiss government has no plans to follow in the EU’s footsteps and impose sanctions against Russia, Schneider-Ammann said in an interview with the Swiss newspaper Schweiz am Sonntag.

Schneider-Ammann said that choosing a side would undermine the country’s neutrality in the matter.

“This role [as mediator] will be weakened, if we duplicate EU sanctions,” Schneider-Ammann said, adding that Switzerland holds the chairmanship of the Organization for Security and Co-operation in Europe (OSCE), which is vitally important for peace talks between Russia and Ukraine.