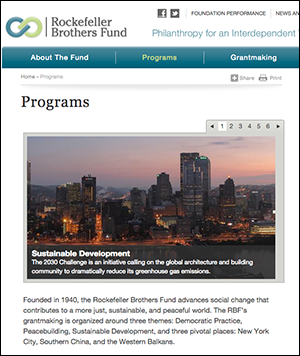 In an unexpected development this week, the Rockefeller family has announced it is planning to withdraw its philanthropic fund’s fossil fuel investments and move into clean energy instead.

Having made one of the world’s largest fortunes through the oil business over the past 140 years or so, they claim they are preparing to slash the Rockefeller Brothers Fund (RBF) holdings in fossil fuels to less than one percent of its total portfolio and reinvest in “clean energy technologies and other business strategies that advance energy efficiency”. Towards this goal, a statement published on the RBF website, which oversees almost $900m of investments, describes an intention to divest coal and tar sands assets “as quickly as possible”.

All of which causes us to wonder whether John D. Rockefeller’s descendents are now perhaps dreaming of achieving a comparable global control of clean energy technologies to that which he himself once had over the production, transporting, refining and marketing of oil? Whilst only time will tell, we suggest it would take a brave man to bet against this.

Ra: I am Ra. The technology your peoples possess at this time is capable of resolving each and every limitation which plagues your social memory complex at this present nexus of experience. However, the concerns of some of your beings with distortions towards what you would call powerful energy cause these solutions to be withheld until the solutions are so needed that those with the distortion can then become further distorted in the direction of power.