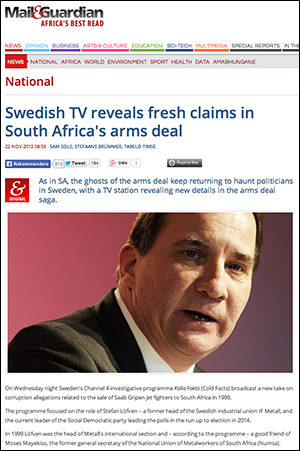 As in South Africa, the ghosts of the arms deal keep returning to haunt politicians in Sweden, with a TV station revealing new details in the arms deal saga.

The programme focused on the role of Stefan Löfven – a former head of the Swedish industrial union IF Metall, and the current leader of the Social Democratic party leading the polls in the run up to election in 2014.

In 1999 Löfven was the head of Metall’s international section and – according to the programme – a good friend of Moses Mayekiso, the former general secretary of the National Union of Metalworkers of South Africa (Numsa).

The focus of the programme was the odd agreement announced in July 1999 when Numsa and the South African National Civics Organisation (Sanco) announced their joint support for the Saab Gripen bid.

“Yes, Prime Minister” Stefan Löfven, but no! This is not good enough!