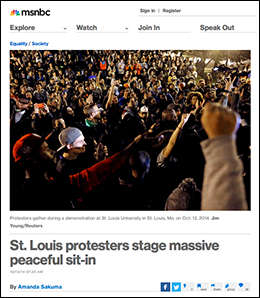 MSNBC. More than 1, 000 peaceful protesters staged a massive sit-in at the heart of St. Louis University’s campus early Monday morning, culminating multiple acts of civil disobedience throughout the city – including blocking an intersection by playing games and jumping rope – on the same night as raw frustrations from activists bubbled to the surface in a public forum.

It’s the fifth night of protests in and around Ferguson and St. Louis, Missouri, an area that’s become an epicenter of civil disobedience since an unarmed black teen, Michael Brown, was shot two months ago.