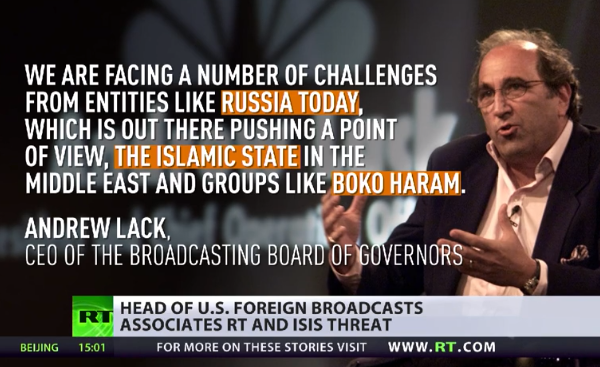 “We are facing a number of challenges from entities like Russia Today which is out there pushing a point of view, the Islamic State in the Middle East and groups like Boko Haram, ” he said.

“But I firmly believe that this agency has a role to play in facing those challenges.”

Newly-appointed chief of US Broadcasting Board of Governors (BBG), Andrew Lack, has named RT one of the agency’s main challenges alongside extremist groups like the Islamic State and Boko Haram.

Lack, the first chief executive of the BBG, mentioned RT in an interview with The New York Times.

Following comments from the US overseas broadcasting chief listing RT as a challenge alongside the Islamic State and Boko Haram, critics said the outlet was singled out for “daring to advocate a point of view,” as well as for “competing for viewership.”

On Wednesday, the new chief of the US Broadcasting Board of Governors (BBG), Andrew Lack, told the New York Times that RT posed a significant challenge – putting the broadcaster in a list alongside the Islamic State and Boko Haram terror groups.

If the US attacks Russia – First target to hit may be RT.com