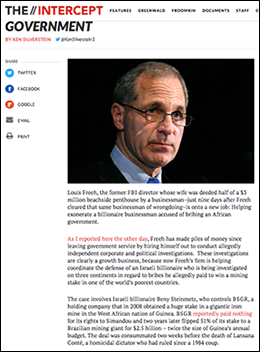 Louis Freeh, the former FBI director whose wife was deeded half of a $3 million beachside penthouse by a businessman–just nine days after Freeh cleared that same businessman of wrongdoing–is onto a new job: Helping exonerate a billionaire businessman accused of bribing an African government.

By Ken Silverstein, The Intercept

As I reported here the other day, Freeh has made piles of money since leaving government service by hiring himself out to conduct allegedly independent corporate and political investigations.  These investigations are clearly a growth business, because now Freeh’s firm is helping coordinate the defense of an Israeli billionaire who is being investigated on three continents in regard to bribes he allegedly paid to win a mining stake in one of the world’s poorest countries.

Read more on The Intercept