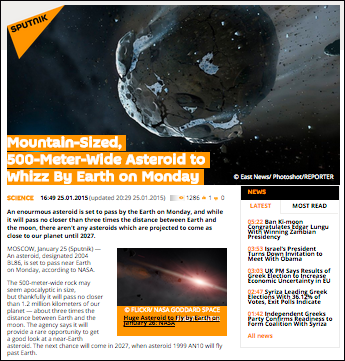 An enourmous asteroid is set to pass by the Earth on Monday, and while it will pass no closer than three times the distance between Earth and the moon, there aren’t any asteroids which are projected to come as close to our planet until 2027.

An asteroid, designated 2004 BL86, is set to pass near Earth on Monday, according to NASA.

The 500-meter-wide rock may seem apocalyptic in size, but thankfully it will pass no closer than 1.2 million kilometers of our planet — about three times the distance between Earth and the moon.