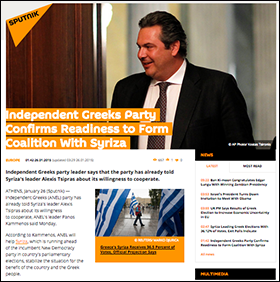 Independent Greeks party leader says that the party has already told Syriza’s leader Alexis Tsipras about its willingness to cooperate.

Independent Greeks (ANEL) party has already told Syriza’s leader Alexis Tsipras about its willingness to cooperate, ANEL’s leader Panos Kammenos said Monday.
According to Kammenos, ANEL will help Syriza, which is running ahead of the incumbent New Democracy party in country’s parliamentary elections, stabilize the situation for the benefit of the country and the Greek people.

“I contacted Tsipras, congratulated him on his victory and said that Independent Greeks, as we have been saying from the very beginning, support the changes on the political scene in our country on the principles, which we announced publicly,” Kammenos said in elections press center.

Bettany Hughes on how Socrates could have solved Greece’s problems

Washington Post: “Greece, a reminder that the European Union was a terrible idea to begin with”

Nation of Change: “Greece – What You are not Being Told by the Media”

Nigel Farage: Greece votes No: The European Union is dying before our eyes